So if your kiddo is like mine and is GF and DF (gluten free and dairy free) but still groans for the days of Kraft mac and cheese. I know that buying mac and cheese that looks like “K” is challenging. Plus the taste is always a little off in some way and doesn’t satisfy the kiddo, usually they will be happy but not HAPPY..

I don’t want to buy Annie’s though it is good but I need my freezer space, so no frozen for me. Plus kiddo likes the boxed “K” and I like shelf stable stuff, so I search for an alternative.

Well first problem is the pasta shape and why do makers of organic brands that do GF or dairy do not make elbow GF pasta with DF cheese sauce? ARRGGHH!!! My solution that I did last night seemed to make kiddo actually HAPPY! So I will now go for this way until brands wake up to kiddos heartfelt needs.

First I bought some dairy free shells and cheddar mac and cheese from Roads end organics, problem pasta not GF and it was shells. So, I had previously bought 2 boxes of the Organic brown rice elbows with gluten free Alfredo nondairy Cheese® sauce mix. (Note my kiddo absolutely did not like the Alfredo). Anyways so since I needed the elbow to be GF I used the brown rice elbows from the last box I had of the Alfredo and tossed out the Alfredo packet and used the non dairy cheddar cheese sauce from the shells. (I can save the non GF shells for me and hubby to add to something another time). 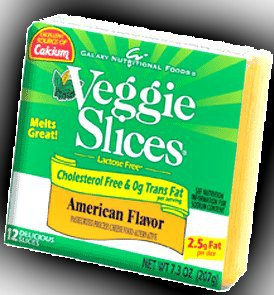 So I cooked up the elbow pasta and drained, in the pot I added cheddar cheese sauce and my DF milk, simmered it a bit then added the pasta. I tasted it and it still needed to be more cheesy and get that color more coated nice on the pasta, so I added a bit of my non dairy, GF butter of choice and MY SECRETE INGREDIENT added two slices of GO VEGGIE brand DF, GF American Cheese slices. It melted so nice and I added the pasta back into the pot mixed until the slices and noodles with the sauce looked like the “K”, lightly dripping DF milk until desired creaminess was achieved. If you let it sit for any amount of time you will have to add more DF milk to loosen it up. Next time I will just use the sauce from the shells + cheese and my own bag of macaroni pasta.

I called kiddo into the kitchen she was very excited to see mac and cheese thinking she was having forbidden “K”. I handed her the bowl she took a bite and I said its GF and DF what do you think? She had a huge smile, rolled her eyes as if in bliss and said ” Momma this is soooooo good, thank you” I said I kinda did a little adding to make it taste good so you like it really? “YES!!!” she said excitedly..

So job well done I have found the mac and cheese for my gluten free, dairy free baby that makes the forbidden “K” not so missed in our home anymore.

MommaSays: While it’s more expensive to buy two boxes like I did (and re purpose or throw out something from each), it’s worth it for the occasional pantry-stable quick and easy meal!

FYI I called the makers of the brand Roads End Organics and asked if all the cheeses are GF, I told them I am aware some Mac and Cheese boxes are GF but are the cheese product in the non GF boxes GF and they said yes the cheese would be not the pasta. Because it is already DF you can be assured that the cheese packets are GF also.

I write this because I heard that Kraft cheese itself the packet were talking about again not the noodle is GF. So it is good to know for all those GF people out there that Roads End Organics cheese packets are also all GF. So if you want organic vs non for cheddar tasting cheese powder that is GF you have a choice (just remember to toss noodles).